We’re releasing 30 stories from both wheelchair users, and people working alongside them to mark our 30th anniversary

This ambitious and historic project will result in stories being archived as part of the The British Library Sound Archives ensuring that the life experiences of wheelchair users and those working alongside them are captured forever. With thanks to the National Lottery Heritage Fund and The British Library for their support.

Senior mobility therapist Marja tells us about the changes that have occurred for wheelchair users since she first joined Whizz-Kidz more than 20 years ago.

From initiatives such as the personal wheelchair budget to improved technology, Marja has witnessed a raft of changes in the world of wheelchair users.

She describes how even manual wheelchair users now have the flexibility to turn their manual chairs into power assist chairs!

So has she witnessed a change in society’s attitudes?

“With societal views, there has been a much greater awareness of disabled population, with both obvious and hidden disabilities," she says.

"I think the Olympics and Paralympics have played a huge role in that. I think society is much more aware of how important inclusion is in mainstream society.

"When I first started, children and people with disabilities were still much more hidden away and not necessarily fully participating, or to the extent that they could be.”

Conducted during the Covid-19 pandemic, Marja describes how the lockdowns and limited access to clinics has affected young wheelchair users.

The uncertain future, at the time of recording, means that wheelchair users, and their mobility therapists, will need more support than ever as we emerge out of the pandemic.

"When you have the time in clinic to see that it works for the children, that they can try it out, it's a really good feeling.

"The best time, it almost brought me to tears, was when I had young teenager, who for the first time was given a powered wheelchair with switch access and a scanner.

"It's very rare for a youngster to be functional with that straight away because of their level of disability.

"But this teenager, she grasped it straight away and within the first session she was pretty much a functional driver with one switch and a scanner and that was just amazing."

“The Disability Discrimination Act has had a big impact and then that was later followed by the Equality Act which gave disabled people and children the right to equal access regardless of their disability.

"It became law that all buildings had to have wheelchair access and ramps.

"When I first started working at Whizz-Kidz, that wasn't the case...

"The other thing that has made a big difference was the voucher scheme and now more recently, the implementation of the personal wheelchair budget...

"The voucher scheme was implemented to give wheelchair users choice if they were not completely happy with what the local services could provide."

"The design of high-performance wheelchairs is improved and more streamlined.

"The biggest difference has been that powered chairs have become a lot cheaper...

"There are devices that you can, as and when you need to, add to a manual wheelchair to either make it almost powered, or to make it power-assist.” 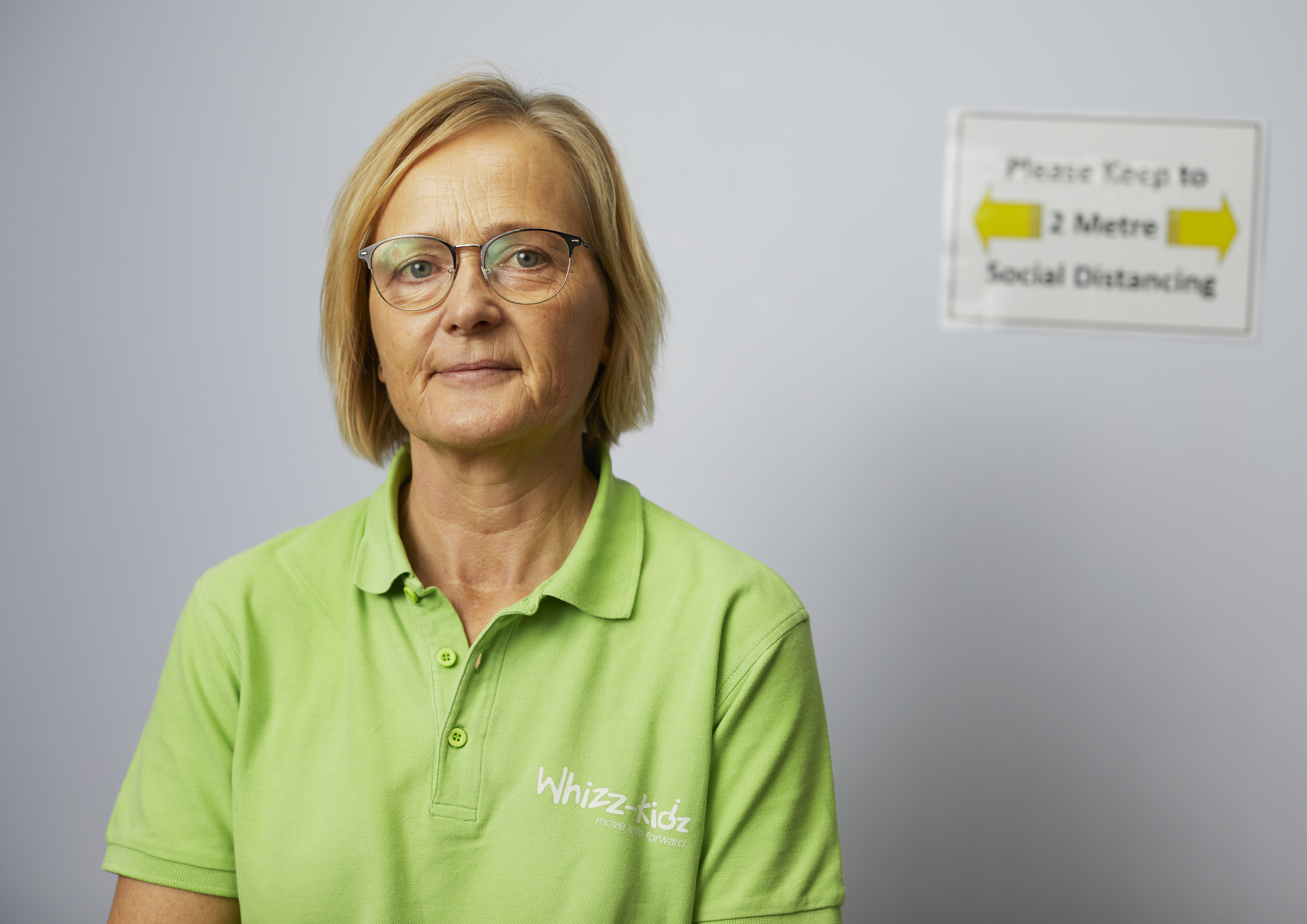 Effects of Covid-19 - Listen to a clip here

“During both the first and the second lockdown, clinics were suspended so families have had to wait longer for their equipment…

"Whilst seeing the children we have to wear PPE and ask the children to wear masks if they’re able to, and it makes the interaction with the children and the families a lot harder….

"What we anticipate is that, because a lot of children haven’t had the therapy input that they would normally have had during their school life, that children will develop more postural problems.”

"When they're more able, we tend to provide the high performance, manual wheelchairs.

"Sometimes we supply the high performance wheelchairs with power-assist wheels - this is where the hubs in the wheels are motorised which enhances the propulsion.

"The other option is to fit a power module to the back of the chair that makes the chair almost fully powered by giving the option of ‘cruise control’.

"This means you just have to use the wheels briefly and the chair starts rolling by itself. Then you touch the wheels to change direction and to stop.

"At the other end of the spectrum of cerebral palsy are the children that have very limited voluntary control over their body.

"They are full-time wheelchair users so they need a high level of support of seating to keep them comfortable and to make sure that they don't develop deformities in different ways.